Hello Friends in Blogland!!
Long time no see....Life has taken ahold of me with the busiest last few months I ever had...and it is continuing this crazyyy busy-ness over the summer as well...
(and here I though Life could slow down!!)
A lot has to do with health concerns over my Mom...as she is deteriorating and new arrangements need to be made sooner than soon...NOT what I was expecting to hear for sure!I never talked about this before as it pains me too much....and I am leaving it as such for now.
I also had my grandaughters staying with us since last week of July, love them to pieces
but they like to be kept busy too...♥
Anywho, on to the veryyyyyy late dueling projects I actually made a while back...
The first one is an ABAC project that April challenged us with last May.
I chose an old oval lined box I had laying around my place and turned it into a frilly one (maybe a tad cheese too! :) ) I had my youngest grandaughter in mind when working on it. She is seven years old and love to collect little treasure...so this is her new box for that purpose.
To April's kit I added the flowers plus the jewels and pearls at the center of each daisy, plus I colored the wooden birdie to fit in with the rest of the designer papers. Michela loved it...she actually took her new treasure box camping with us too!It is now almost filled with lil twigs, pine cones and small leaves...Have nooo idea what she'll do with that! ♥ 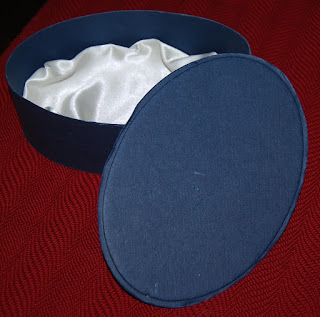 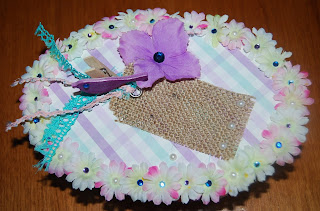 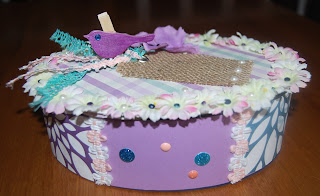 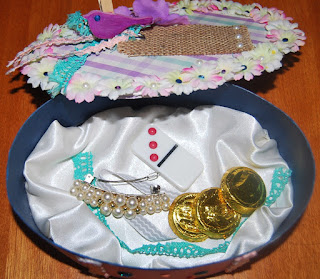 YUP! ♥ That's what the theme was for June, selected by Terry (Dazzlers) and Barb( Divas)

My card was made from a lovely kit that Terry sent us for the June's duel...
This card was actually buried under an undisclosed amount of crap....ooppsss I mean craft items
from my overloaded dining table!! I even forgot I took a picture of it at the beginning of this month but too  busy NOT being at home much....
Anyways I am hoping that later is better than never....;) With my apologies Terry!! 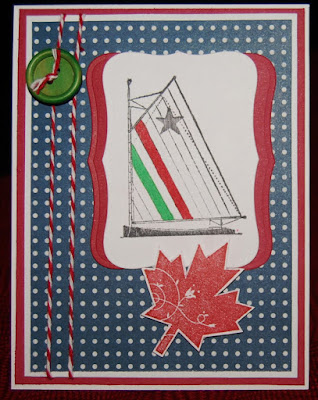 I created my card to reflect that I have Italian roots and that I als reside in this wonderfully amazing Country called Canada , hence the Italian flag's color showing up on the sail and via the green button that I added, along with the white and red candystripe floss. My Canadian proudness is showing by also adding a stamped maple leaf to the mix. A smaller leaf was also added on top of the sentiment, inside the card.
I am actually quite pleased with the simple yet strong result.

We were also asked what is our thoughts when we see the Flag.
For me, there are many thoughts of feeling honored to partake in BOTH Countries' national holidays in my own ways, but mostly I feel this sense of total and immediate happiness every time I see either a Canadian Flag or an Italian one (mostly on my Italian channel!) being raised or just flowing freely in the breezy air! Sio proud of both my heritage and this adopted Country that is Canada, the true North strong and FREE!

Thank you Terry for such challenge....and a challenge it was tring to figure out how to make a card that would represent the colors of two countries ♥ Loved it!! ☻ 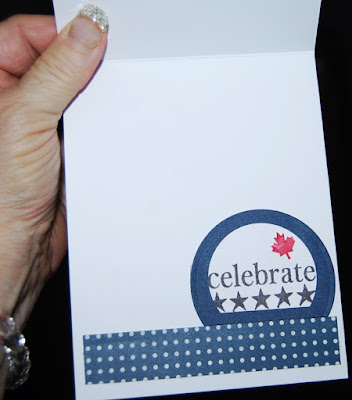 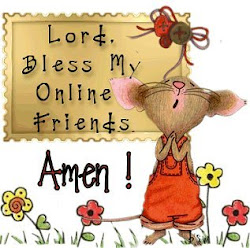 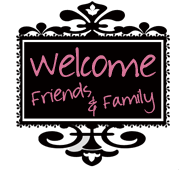 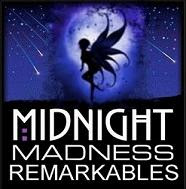 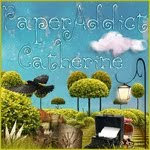 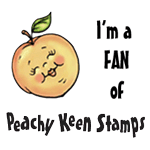